A reply to the declarations made at the Public Council of Sochi, on the 10th of February 2014 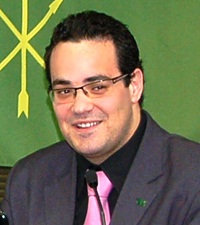 Below article is written by Tiago Ferreira Lopes, a reasearcher and an analyst on Caucasus and Middle Asia, giving insights about a recent meeting whcih Russian Federation President Vladimir Putin joined.

I have recently been alerted of a certain meeting with the Public Council of Sochi in which Vladimir Putin, President of the Russian Federation, and Mr. Chachukh, Chairman of the Public Parliament of the Black Sea Circassians-Shapsugh, and Vice-President of the International Circassian Association, discuss the “Circassian Question”.

After seeing carefully listening and reading (a good transcription) every word of Mr. Chachukh, at least three times, I have to confess I am disappointed but not surprised. The tendency to transform dark realities into rosy scenarios is not confined to the acolytes of the Kremlin, it is like a flesh-eating bacteria that contaminates those to close of the infectious body.

It is true that in its initial years Soviet Russia, under Anatoly Lunacharsky (Soviet People’s Commissar for Enlightenment) and Joseph Stalin (Soviet People’s Commissar for Nationalities), had promoted programs to develop and strengthen Circassian identities. It is also true that the current regime installed in Moscow has tried, in many ways, to copy those programs that were stopped with the pogroms of the 1930’s and with the massive deportations that followed the Great Patriotic War in the 1940’s/1950’s.

What is also true is that the programs in question were designed to deepen the division of the Circassian identity into three labels: Adyge, Cherkessk, and Kabarday. The same programs designed to give to those ethnic groups Cultural privileges without political rights. The idea was to develop Cultures that would stick solely to Dancing, Poetry, Painting and local Wardrobe; the idea was never to develop fully aware ethnic communities, able to fight autonomously or even independently. Clearly, the effort paid up, listening Mr. Chachukh’s declarations.

To trade the recognition of the daunting acts of the Russian Empire towards the Circassians, because some towns experienced some sort of infrastructural and economic development could have been considered anecdote if the case wasn’t so serious. To welcome the event because some districts faced development Mr. Chachukh is the same as to ignore the numerous Circassians killed during the Russo-Circassian War; the numerous Circassians that died during the deportation; the numerous Circassians that cry every night because their homeland was steeled from them. If Mr. Chachukh is indeed the Vice-President of the International Circassian Association why is he not taking into consideration the daily suffering of so many souls scattered around the world, away from their homeland?

In an article that I have published at Strategic Outlook in 2011, I have written that the “International Circassian Association has lost its legitimacy to speak for the Circassians worldwide and needs to be replaced by another organization or institution”. The strange words of Mr. Chachukh completely derailed from the real pleas of those he says he represents only confirms my diagnostic: the International Circassian Association is dead and needs to be replaced urgently… Or it will get putrid!

I do not believe in a confrontational stance with Russia. If an autonomous or independent Circassia is to emerge in the XXI century (as I believe it should!), Circassians will have to negotiate not only with the neighbors Karachai-Balkars and Ossetians but also with the
Russians. Circassians cannot wish to themselves the faith of their brothers in Abkhazia that tried to gain independence without an ample, constructive and meaningful dialogue with the Georgian government. The result was a frail independence that was unable to be confirmed by the international community with only six UN member-states confirming the Abkhazian dream.

Circassians will need more “Circassian Houses” to explain their Culture to the Russians and to the world but also their History and their Political ambitions. Circassians need to speak cordially and diplomatically with the Russians, but the Russians need to look to Circassians as equal parts on the negotiating table. Conspiracy theories, re-writing history, covering the truth, silencing activists will get nothing to Moscow.

I would be first sheering Mr. Vladimir Putin if he opened an equitable, meaningful and truthful negotiation process to restore (at least) the autonomy of Circassia. I would even be available to help in the negotiation process, serving as a mediator. I would be available to serve as a mediator in this issue without getting paid. I would be the first to criticize Circassians if they would show any sort of incapacity at the negotiating table. But for all that to happen, Mr. Vladimir Putin and his puppets need to stop fearing dialogue. Truth (sometimes) hurts, is a fact I personally know, but it provides a most need psychosocial cathartic momentum!

The intriguing fact is that you don’t need to be a Circassian to promote a Circassian-minded agenda. You just need to be Human. Circassians do not want to steal anything from the Russian Federation, they just want to recover something that was theirs until the fatidic year of 1864! Something that was theirs until 150 years ago… And if the strategists of the Kremlin think that the Winter Olympics in Sochi was the finish line for Circassian activism they are very much wrong. This is just the beginning!

Coordinator of the Platform 20*10 for the Alliance of Civilizations

Lecturer of Comparative History of Civilizations at Kırıkkale University

Statement of Support for Circassians to US Congress

New Jersey Congressman Bill Pascrell (D- 9th District) submitted this “Statement of Support for the Circassian People” to the United States Congress on January 29, 2014.
This statement in the Congressional Record was made possible by our letter campaign and petitions submitted by supporters of Circassians worldwide.

Last 7 years, Circassians and their friends have delivered the true story about Sochi to the World. We have prepared a media kit to summarize our points, our reasons, and demands about Sochi. We have also put the media coverage about our movement together. Please download and use it to spread our message. Support us to reveal the truth about Sochi!

kNOw Sochi have reached the goal!

We are in the final step of Know Sochi campaign. The campaign has started 20 November and reached its goal of $5000 with your support. We have completed production of kits in the first week of January and we have delivered the information kits to the athletes over their National Olympic Committees.