Sochi Is Haunted by the Ghosts of a Forgotten Genocide 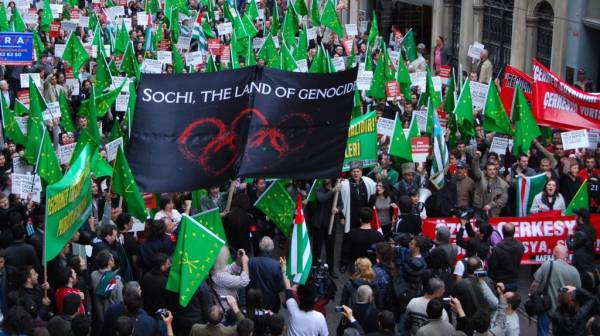 The Winter Olympics arrive 150 years after an ethnic cleansing

Beginning Friday night, hundreds of millions of people will tune in to the Winter Olympics, which Russia hopes will prove to the world that the country has re-emerged as a world power after its long, post-Soviet funk—and that Sochi itself deserves “international resort” status. Elided from this narrative, though, is what took place in exactly the same spot 150 years ago, when Sochi’s indigenous residents were routed by the Imperial Russian Army, the survivors herded onto ships and exiled, never to return.

Unacknowledged by Vladimir Putin’s government, the ethnic cleansing of the mostly-Muslim Circassians is considered Europe’s first modern genocide by many historians and provides a gloomy backdrop to the Olympic glamour in this subtropical city—not least for surviving Circassians who are furious over being excluded from the celebration in Sochi.

Circassians have lived on the Black Sea coast since at least the time of the ancient Greeks. They have their own language, but at the time of the Russian invasion they were largely illiterate—they had no Anne Frank, no one who recorded the details of their destruction. The closest equivalent was an anonymous Circassian who sent an appeal to Queen Victoria, dated April 12, 1864.

“It is now more than 80 years since the Russian government is unlawfully striving to subdue and annex to its dominions Circassia,” reads the letter, an odd-shaped piece of cheap paper with wobbly lines of Ottoman Turkish, signed simply “the Circassian nation.” “It slaughters like sheep the children, helpless women, and old men that fall into its hands. It rolls about their heads with the bayonet like melons, and there is no act of oppression or cruelty which is beyond the pale of civilization and humanity, and which defies description, that it has not committed.”

By the time that letter reached the diplomatic folder in London’s National Archives, where it remains to this day, the Circassians’ ruination was complete. As the Russian soldiers advanced, they drove civilians before them—a clever tactic, but a dreadful one. The population of the remaining Circassian-held territory rose, exhausting food supplies, spreading disease and undermining resistance. “Sometimes whole groups of emigrants froze or were carried away by blizzards, and we often noticed, going past, the traces of their blood. Wolves and bears dug through the snow and pulled human bodies from underneath it,” wrote French adventurer Arthur de Fonvielle, who came to help the Circassian resistance but served only as a witness to its end.

The refugees huddled on the shore, where they awaited ships the Russians contracted to take them away. Without shelter or food, many died before they could board, while the journey across the Black Sea to the Ottoman Empire was horrible. De Fonvielle’s ship was so tight-packed that the crew had to walk on the emigrants’ heads to get to their places. Of his 346 fellow-passengers, 21 died during the four-day crossing. “If we had had to spend another 48 hours at sea, then more than half the passengers would probably have died,” he wrote.

Their troubles were not over. The Ottoman government struggled to provide shelter and provisions for the immigrants, whose ships arrived daily and who overwhelmed the towns along the empire’s coast: Trabzon, Samsun, Sinope, Varna (in modern-day Bulgaria), Kefken, and elsewhere. Hundreds died daily of typhus, smallpox, and other diseases, and were buried in mass graves. “The quarters in the vicinity of the cemeteries are rendered uninhabitable owing to the careless manner in which the dead are buried, and the offensive consequences thereof,” wrote the British consul in Trabzon in February 1864, when the exodus was only just beginning. “The chief aqueduct which feeds the fountains of the town is tainted, a Circassian corpse having been found floating therein.”

The death toll is unknown. Contemporary Russian accounts made a guess of around 300,000 out of a total Circassian population of a million. Some modern analyses suggest the toll was more than twice as high. When I visited Trabzon in 2008, I met an old man who remembered digging up innumerable human bones as a boy, in what is now a field of hazel trees. He said he and his father had thrown them into the sea.

The Ottoman government settled the survivors on marginal land in central Anatolia, in the Syrian Desert, in Galilee. The Ottoman Empire is long gone, but the Circassians remain where it put them, and they now number about five million. The largest group is in Turkey, but other communities survive in Syria, Jordan, Israel, Kosovo, and the United States (many of whom fled their homes in the Golan Heights when Israel captured it from Syria in 1967). Around 750,000 of them live in Russia, far inland and to the east of Sochi, descendants of the few Circassians who managed to stay behind.

The Cold War and feuds of the Middle East kept the diaspora disconnected until the advent of modern communications. Circassians in Israel told me about the thrill of hearing their music on Syrian radio in the 1960s. Now, they can chat to their lost cousins on Skype. “Connections among Circassians all over the world have significantly strengthened in the last 10 years, with the main factor being the arrival of the internet and modern communications,” Ruslan Keshev, a Circassian activist in Russia, told me.

And now the Sochi Olympics have stimulated a re-awakening among Circassians. To hold the games in their homeland on the 150th anniversary of its sacking, and not even acknowledge that history, feels like a deliberate insult.

Circassian activists protested in Vancouver and London, outside the United Nations in New York, and outside the Russian consulate in Istanbul. This drew some media attention, but little sympathy from Russian officials. Police arrested Keshev and other Circassian activists in mid-December on charges of “extremist activity.” “We hoped that the Olympics, as a symbol of peace and justice, would be the key to solving the problems of Sochi’s native people, the Circassians who still live in exile, but our hopes were ill-founded,” said Keshev.

But the only high-profile ally the Circassians have won is Doku Umarov, leader of the Islamist insurgency that has grown out of Chechnya’s shattered independence bid, and whose allies recently blew themselves up in the city of Volgograd. “They plan to stage the Olympic Games on the bones of the many, many Muslims who died and are buried on our territory along the Black Sea. We, the Mujahedeen, must not allow this to happen,” Umarov was quoted on his website as saying last summer.

The Circassians could do without such support since they reject violence and activists’ long-term goal is to regain their homeland. It’s an ambitious aim, a kind of Caucasus Zionism, but the activists think it is feasible. “It might not be easy for the immigrants who are going to the Caucasus, that first generation, but their children are going to be fine. It’ll just be like when my parents came to the U.S.,” said Tamara Barsik, a Circassian-American who lives in New Jersey.

In the meantime, they’ll have to watch the Sochi Olympics on television, like everyone else.

Statement of Support for Circassians to US Congress

New Jersey Congressman Bill Pascrell (D- 9th District) submitted this “Statement of Support for the Circassian People” to the United States Congress on January 29, 2014.
This statement in the Congressional Record was made possible by our letter campaign and petitions submitted by supporters of Circassians worldwide.

Last 7 years, Circassians and their friends have delivered the true story about Sochi to the World. We have prepared a media kit to summarize our points, our reasons, and demands about Sochi. We have also put the media coverage about our movement together. Please download and use it to spread our message. Support us to reveal the truth about Sochi!

kNOw Sochi have reached the goal!

We are in the final step of Know Sochi campaign. The campaign has started 20 November and reached its goal of $5000 with your support. We have completed production of kits in the first week of January and we have delivered the information kits to the athletes over their National Olympic Committees.